I have mentioned a few times before that I am severely hearing impaired thanks to a Genetic condition. I rely on the use of hearing aids to be able to communicate with those around me. I’ve been hearing impaired for over 5 years now. While being able to hear with hearing aids is awesome in and of itself but using them leaves me unable to use headsets. Its been over 5 years since I have really been able to use headphones, bluetooth ear piece and a normal phone (thankfully cell phones are rated for hearing aids). Its small things like this that make life of a hearing impaired person a bit harder. With most headphones and headset they cause feedback or even the sound to fail on my hearing aids. This is where Kingston’s HyperX Cloud II headsets come into play. I was fortunate enough to be able to try the HyperX headset. I was in shock. They actually worked with my BTE (Behind the Ear) Hearing aids. There is no distortion or loss of sound at all. They fit so comfortably around my ears and cover all of my hearing aid so that there is no loss of sound. It features memory foam padded headband and ear cups. It helps cushion your head for max comfort during extended wear. There are also 2 types of ear cups, Vinyl and a super soft flocked material. HyperX is typically a gaming brand but this headset works amazingly with hearing aids.  The 7.1 surround sound and closed earcups offers unbeatable sound quality while blocking unwanted noise. It offers a detachable noise and echo cancelling mic perfect for those skype calls or long nights of raiding or if your like me, late night sewing marathons where you dont want the music to wake the whole house. The advance USB control box and 3.5mm mini stereo jack offer multiple ways to connect to yours device (it works with PC/Mac, PS4, Xbox One, and phones/tables/MP3 devices) and inline mic and earcup volume controls (this is detachable for use with mobile devices). It all stores in an included mesh storage bag. The Headset is available through Amazon for $99. It is a bit on the higher end of the headphone spectrum but well worth the cost for the outstanding performance. There are available in gun metal, white/pink (as shown), and black/red.

A HUGE Thank you to HyperX for producing an amazing headset that works so well with hearing aids and for sending this headset to me for review. All thoughts and statements about the headset are my own. For more details and a better look at the headset head over to my Youtube channel and check out my video review. Closed Captions are available.

Let me start off by saying I was sent Palmolive Fresh Infusions for free to try. All Opinion are my own.

I was sent all 3 scents to try. When I first opened the box it smelt heavenly. The scents are Lemon Thyme, Ginger White Tea and Lime Basil. Lime Basil is by far my favorite. It smells just like a Key Lime pie. The only thing that varies between them are the scents. I really can’t think of a way to describe the Ginger White tea but Lemon thyme is a nice fresh lemon scent. The cleaning power is great with these. I tested by using it to clean a pot with burn on Chili…. It took little effort on my part. It also didnt leave my poor eczema prone hands all dry feeling like other brands.

I defiantly will be buying this again and I have already recommended it to several people.

This is a LONG overdue Review. Its also the first in a few I have to post. I Purchased the tester and the review is all my own…

Before Venom was born I was lucky enough to receive a Tester Diaper from Oeko Popo Diapers. I only had to put down a 10$ deposit that would be returned at the time that she received my review. It was a great deal and the diaper is adorable. Venom has been Cloth diapered from the start, minus the 2 days we were in the hospital. She was 20.5″ long and 7lbs 3oz at birth and 6lbs 13oz when we left the hospital. She was so tiny I knew that she probably wouldn’t fit it right away. She now weighs 14lbs. 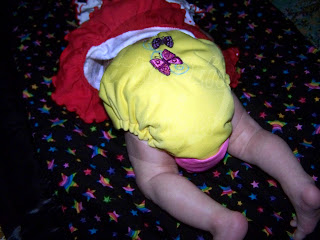 The diaper came wrapped in tissue paper and ribbon with a hand written note. I love tiny details like that. When I send out orders, I do the same extra touches to show that I am not a machine…

The diaper is yellow and pink with butterfly embroidery. Its a Pocket diaper with a welt pocket opening. The inside is athletic wicking mesh. It has adjustable back elastic and cased leg elastic, as well as front elastic. For a closer it uses swimsuit hooks. I was intrigued by the use of bra slide for the adjustablity. They hold very well and are simple enough to use.

At 2 weeks old I decided to try it on her. It fit okay, the front gaped a lot. While the legs fit wonderfully. I kind of wish there was a way to cross over the taps or that the front elastic was tighter. Now at 1 month the fit is a bit better. It still gaps just a bit.
Now at 4 and a half months it now fits almost perfectly.

It came with an insert but at first look its very small. I feel like its just to tiny. Also it doesn’t seem adsorbent enough, But Venom is a super soaker at times. I’ve added extra stuffing when she wears it. It did make stuffing a bit harder. I did try just laying in a soaker and I had leakage. Im not sure if it was Mummy error or what. When I stuff I haven’t had an issue. It does hold her Breastfed poop with out an issue.

Overall, its a great diaper. The design is great and very well made. I really recommend that you check the store out.

ETA: The creator of this diaper at this time is working on her own free to use pattern and doesn’t have any diapers for sale that I’ve seen.

My darling little symbiont, while I’ve enjoyed most of the experience of you growing inside of me. Please consider this your final eviction notice. Your lease is up on Tuesday, however there have been some questionable practices going on in your dwelling place for a few days now. This includes (but are not limited to), painful contractions that don’t end up in labor. Both Poppa and I have decided that it is time for you to get out. We can’t wait to meet you and hold you. You have 24 hours to vacate the premises or your landlord may have to forcefully remove you.

Thank you for your cooperation,
Mummy

We have hit 39 weeks…. And the waiting is in full effect, it feels like this is going on forever. I think I’ve repacked the hospital bags like 3 or 4 times now… not to mention there is not much left to clean in my house. I just have daily chores to do… I’ve received all of the packages I was waiting on. I have 2 reviews planned for when she finally takes Mummy and Poppa’s eviction notice seriously.

I was lurking on Diaper Sewing Diva’s Proboard and some one was talking about Sweet Cheeks Cloth Diaper detergent. So being the curious person that I am. I checked out her Etsy and ordered a sample size to try. I ordered a sample of the Buttercream Cupcake, because you can’t go wrong with cupcake scented laundry soap… I plan on doing a full review once I use it. (I’ve already prepped her diapers with Rockin Green Detergent. Which I need to write up a review for as well)

I also was lucky enough to snag a Tester diaper from Oeko Popo Diapers. Its a seriously cute diaper. Jules, make one sized pocket diapers unlike any of the others I’ve seen.Check out her facebook page and keep an eye out for the review. Its coming eventually…. 2.5 weeks tops…

If you follow me on twitter, you may have noticed some tweets about a Site called PayBox.me I’ve been using the site for about 2 weeks now so I figure that its a good time to give a review.

Overview:
The site is still in its beta testing a developement stage but when completely up and running it will work similar to PayPal. Right now, for signing up as an “Early Bird” member. their giving away free money. You earn $25 for signing up and up to $20 a day just for logging in. Plus $10 for every referral you get.

My Thoughts:
The site is super simple. Upon signing up they didn’t ask for any super personal information. It did make me question how I would get the money that I’m earning but currently you cant do much more than earn, refer, or send/recieve money to another member. I didn’t see the harm in signing up with out giving out my info, I’m earning free money just by logging in to a site and leaving. How much you earn daily depends if you participate in a few simple surveys, or voting on the eventual debit card designs. You can also submit your own card designs. So far over the last 2 weeks with daily logins and a few referrals I’ve made a pretty decent amount.

I recommend checking it out and possibly signing up for it. You don’t really have anything to lose.